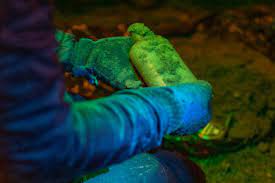 A team of 5 Scientists has arrived at the rendezvous spot of Michigan’s State university campus on Thursday morning before sunrise. One of the scientists had a shovel over their shoulder to dig up the soil.

Every 20 years, scientists dig up the soil to recover the seeds kept in the darkness that was soiled around 142 years ago under a college campus.

The team is working on more than 1000 seeds, 21 different species ranging from redroot amaranth to black mustard to white clover.
One of the scientists had an architectural blue print map that was from the year 1931. It is a botanical version to find the treasure. The treasure includes a bottle filled up with sand along with plenty of old seeds.

All these five scientists have been assigned to a multi century project of the Beal Seed Viability Experiment. It is a centuries-long quest to discover how far seeds can lay inactive in the dirt before losing their ability to ripe. Every 20 years, a group of scientists set out their way to the buried seeds at night, dig the bottle out containing dirt and seed. Furthermore, they spread the seeds over the sterile soil to find which of these seeds germinate.

It is a 142 years old experiment. It is one of the greatest long-run experiments. According to some Botanists, this experiment is expected to be further conducted for another 80 years.

In the year 1878, the famous botanist of Michigan state, James Beal, buried around 20 bottles in different places of the campus and expected the upcoming scientists to dig them up and conduct further studies every upcoming five years.

With passing time, apart from measuring the viability of seeds, the experiment is becoming interesting. With advancing technology, scientists can provide more information about the plants rather than solely seeing their capacity to germinate. They will look into seeds to visualize how they function, start to figure out what causes survival, and even resurrect organisms that appeared to be extinct.