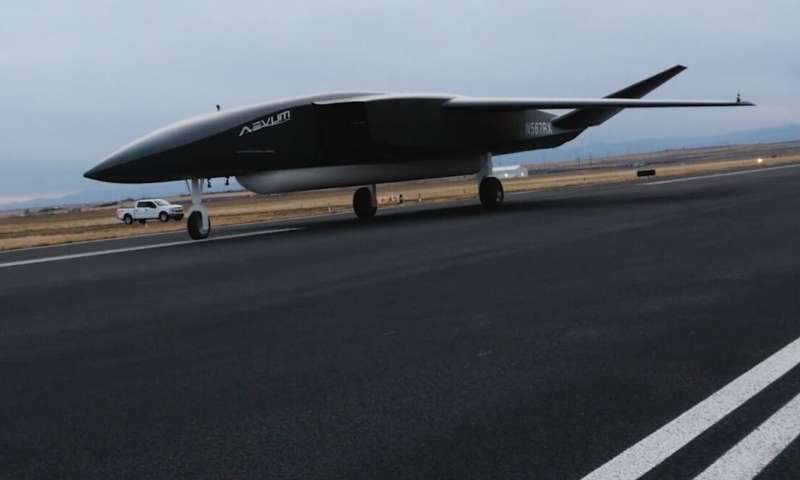 A drone that measures 24 meters long, 5.5 meters high and 18 meters wide. A driverless plane that is ready to launch satellites into space. The Aevum Ravn X has an advantage in the space race and that is that it can serve no matter the weather conditions.

Aevum Ravn X is an autonomous aircraft, that is, without a driver and has several advantages. The Aevum company has said that its giant drone can land on a 1.6-kilometer-long runway and only needs a space of 743 square meters.

That is far less than what a large plane like the Boeing 747 requires, which needs more than 3 kilometers long to land. Comparisons aside, this curious drone features a body that is 70% reusable. So much so, that the Aevum company is committed to fully reusable bodies for the future.

The goal of the world’s largest drone is to launch space. Initially it will launch small satellites and payloads into space to orbit them. Aevum has calculated that his drone can do this type of transport every 180 minutes. That is, in 3 hours the Ravn X drone can take off, drop the cargo into space and return to the runway to land .

The company wants to reinvent the concept of space technology and supersede a bit of what we know so far. Aevum is working with software and automation technology so that the drone itself acts autonomously, so it will not be necessary to put the life of a pilot at risk as happens in conventional launches.

The US Space Force wants to work with Aevum and its plans are to launch different satellites in low Earth orbit. The reason for these maneuvers has not yet emerged. This giant drone can work under almost any weather condition . Unlike its competition, SpaceX that when the weather is not in its favor aborts the mission, thus wasting time, money, opportunities, etc.

Besides, of course, the failures that can arise, and let’s not forget that within it there are human lives at stake . The space race is getting interesting and technology is undoubtedly gaining ground. Not only in the space race, but also in potential commercial flights with autonomous planes .