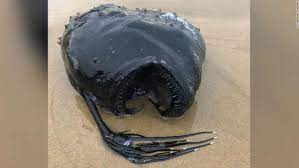 Last week, a unique fish with glass like sharp teeth and football like body washed up  on the shores of California beach.

This creature was black in color with gaping mouth washed on sands of the beach. It was washed in the Crystal Cove State Park’s Marine Protected Area in Laguna Beach on last Friday.

Social media posted that these kind of angler fishes are rare to be seen on shore and is yet unknown that how it ended up in the shores from the deep ocean.

These Pacific Footballer fishes are a species of the angler fishes. The California State Parks says that these fishes are usually present at the depths of the ocean. They have share glass like teeth and a huge body. They are capable of swallowing preys of their own body size.

In view with the size of the body and presence of the stalk on head, it is predicted that this was a female fish that washed up to the shores.

The Crystal Cove State Parks says that only female possesses long stalk with luminescent tips which glows under the dark areas of the deep ocean. They are generally found 3000 feet below the water which are generally dark due to absence of the light. They use this luminescent light to capture their prey.

Generally, in these species of angler fishes, females are capable to grown up to 24 inches while males grow only up to an inch. Males are only capable for mating.

It was written in the posts that “Males latch onto the female with their teeth and become ‘sexual parasites,’ eventually coalescing with the female until nothing is left of their form but their testes for reproduction,”

The body of the fish is kept with the California Department of Fish & Wildlife. This body will further be used to study and research more about this species.

It was also said that it is fascinating to see creatures like these above the water and it will definitely help to learn more about the deep ocean creatures. 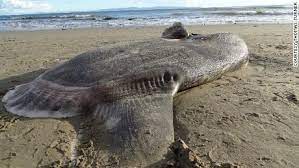