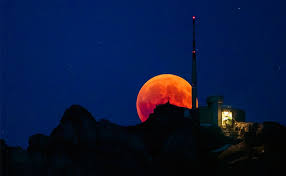 When the Earth aligns itself between the moon and the sun, there happens the complete lunar eclipse, which will give a Blood red appearance to the moon says NASA.

According to the experts, this event is explained as “When the lunar eclipse occurs, the only light reaching the surface of the moon comes from the Earth’s atmosphere’s boundaries.
The majority of the blue light is scattered by the air atoms in Earth’s atmosphere. The rest of the light is reflected on the surface of moon making it appear red in color and hence the name Blood moon!”

This Blood Moon will be a combination of May’s full flower moon which is also known as Super moon along with the complete Lunar Eclipse.

The perigean full moon, which is also called the Supermoon occurs when the moon’s side is face over the earth and it is then lighted by the sun. At this time, sun will be at its closest point in its orbit around the Earth.

It is also said that moon will reach  reach the closest point in the orbit around the sun, before it becomes the super moon and gets completely lighted by the sun.

The whole eclipse of the Blood moon will fairly last for about 14 minutes and 13 seconds. After this time period, the moon will pass through the umbre of Earth.

Later, all the events will be repeated in reverse direction after it moves out of umbre of Earth.