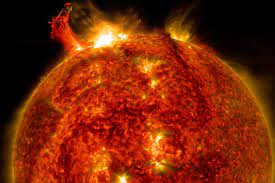 Recently a few days ago, a superheated gas shot of the Earth’s surface. They were million tons in number. These shots traveled towards the Earth at a speed of 90 million miles.

Coronal mass ejection is the name of this eruption. This ejection was not very powerful in the space environment, but it got triggered as soon as it entered Earth due to the Earth’s magnetic field. This can be considered as one of the strongest geomagnetic storms that have been seen in years.

There were no disruptions due to this storm, and many people might have even experienced it, but it indicates that the sun has woken up and is not in its slumber mode anymore.

These storms are generally harmless and are invisible to humans, but on entering Earth’s surface and due to the production of geomagnetic waves, these storms can cause hindrance in radio communication, can ripple off power lines also can cause damage to airline crew because of the emission of radiation and to the extent it can cause harm to the satellites.

The sun has begun its 11 years cycle the previous year, and the peak of this cycle will be reached in the year 2025. This climate in space may create issues for humans on Earth. This kind of storm took place around 17 years ago. The U.S. advised hardening the grids that could potentially save 25 billion dollars of power industries.

Discussion between scientists is going on to save the vulnerable things on Earth from these upcoming geomagnetic storms. They are suggesting putting extra surge protectors in the grid to gain extra resistance and using nonmagnetic steel in transformers etc. These all can boost up the situation, but mainly the forecast is required to overcome these space catastrophes.

Earlier, the most powerful solar storm was recorded in the year 1859 Carrington Event. Also, scientists believe that if some storm with the same magnitude would hit the Earth now, then it might lead to a power cut for millions of people.