How has James Hetfield’s Music Career Been So Far? 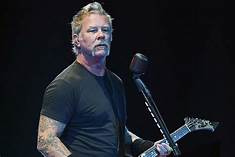 James Hetfield is an American musician and a songwriter. He is best recognized as the co-founder, lead vocalist, rhythm guitarist, and primary songwriter for the American thrash metal band named Metallica. He is mainly known for his rhythm playing, but he also performs lead guitar duties and solos. He co-founded Metallica in the year 1981. he has 19 Grammy awards and launched ten studio albums, three live albums for extended plays & 24 singles. His genres include heavy metal, thrash metal, hard rock, and speed metal. He was born on August 3, 1963, in California. His parents got separated when he was just 13 years old. His mother died when he was 16 years old due to cancer. Headfield attended Downey High school as his freshman, and he completed his graduation from Brea Olinda high school in 1981. He was only nine years old when he began with his piano lessons. And at the age of 18, he started to play guitar with Robert Okner. When he was a teenager, he was a few bands, namely leather charm, and obsession. His biggest musical inspiration as a child was Aerosmith.

This American guitarist, singer, and songwriter are having a net worth of $300 million. He is most famous for his popular heavy metal band Metallica. The albums of Metallica are popular worldwide and sold copies in millions. Metallica is one of the highest-earning bands in the world today. If Metallica is on tour, they are known to generate $50-100 million in revenue from the ticket, merchandise, and more. The band generated $70 million in revenue between July 18 and July 2019.