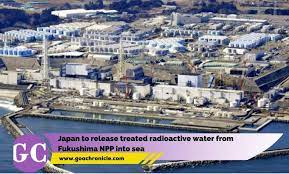 Recently on Tuesday, Japan’s Government decided to release the treated radioactive water of Fukushima Nuclear Plant into the Pacific Ocean in upcoming two years. This decision of Japan’s Government is greatly opposed by the Fishermen as well as the nearby residents of Japan.

But recently, in the meeting of Cabinet Ministers, the decision was taken to get rid of the treated radioactive water by releasing it into the ocean. This decision kept on delaying to due to the protests and safety concerns but now the decision has been taken.

According to the sources, the accumulating water has been kept stored in the Fukushima Plant from the year 2011. Meanwhile the tsunami and earthquake damaged its reactors and moreover, the cooling water was leaked and got contaminated. It’s capacity will be reached by the end of next year.

Prime Minister of Japan stated that releasing of the water into the ocean is the only best possible and realistic way of getting rid of the treated water. He furthermore requested the Government to take care of the safety of people before releasing the water. He also added not to spread any rumor about the treated water damaging agricultural land or Fisheries of Tourism. The Government officials and Plant operators said that all the radioactive materials are reduced to level allowed to be released in ocean except Tritium which they failed to completely remove from the water. They also said small amounts of Tritium is not harmful.

Scientists say the long term impact on marine lives and environment can not be predicted. The government officials call it as the “Treated Water” but they are still radioactive. The radioactive substances can only be lowered to safety level and can not be completely removed.

According to source, the plant will be releasing water into the ocean after sticking to all the safety measures in coming two years as they can not hold back the water any more considering the safety of environment and people around the Plant.

Also, China and South Korea opposed the decision of Japan stating that they are not concerned about the health of neighborhood countries.