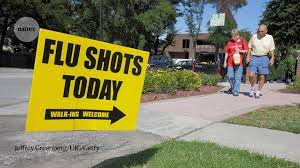 This year Pennsylvania records its lowest number of seasonal flue said the Officials on Friday. The biggest vaccination programs and mitigation measures against the COVID 19 infections also kept the no. Influenza cases low this year.

The flu season in Pennsylvania ended officially on 22nd May this year with only a record of about 3664 cases which were confirmed in laboratories. This data was given by the Deputy Secretary of Health Preparedness and Community Protection.

Cases of seasonal flue were decreased up to 95 % when compared with previous year data amid the Increasing COVID 19 cases.

The secretary of Health Allison Beam said that there were more than 130,900 cases seen in the previous flu season which were quite higher than normal.
Data also revealed that about 49 people were only hospitalized during flu season and only 21 deaths were recorded.

A comparison was done between the seasonal flu and COVID 19 for this year along with the Seasonal flu and N1H1 flu season which was predominant in the year 2015 to 2016.

In the total cases recorded in Pennsylvania, both Influenza A and Influenza B were observed. But more than one-third of Pennsylvania recorded even less than 10 cases. So this yea Flu epidemic was recorded to be very low.

Even though the no. Of tests done for this epidemic season were quite higher, the no. of cases reflected, was very low.

The officials said that there were increased laboratory tests for Influenza A and Influenza B along with COVID and therefore the cases that came positive for flu were quite low.

The Department of Health and the federal Centres associated with Disease Control and Prevention said that the symptoms of flu and COVID 19 can not be differentiated without any confirming laboratory tests.

Also, a patient can have Influenza as well as COVID both at the same time so laboratory tests are the only means by which the disease can be confirmed.

Also, the experts say that the main reason behind the falling cases of the Influenza virus could be the uptake of the COVID vaccine working in both ways.