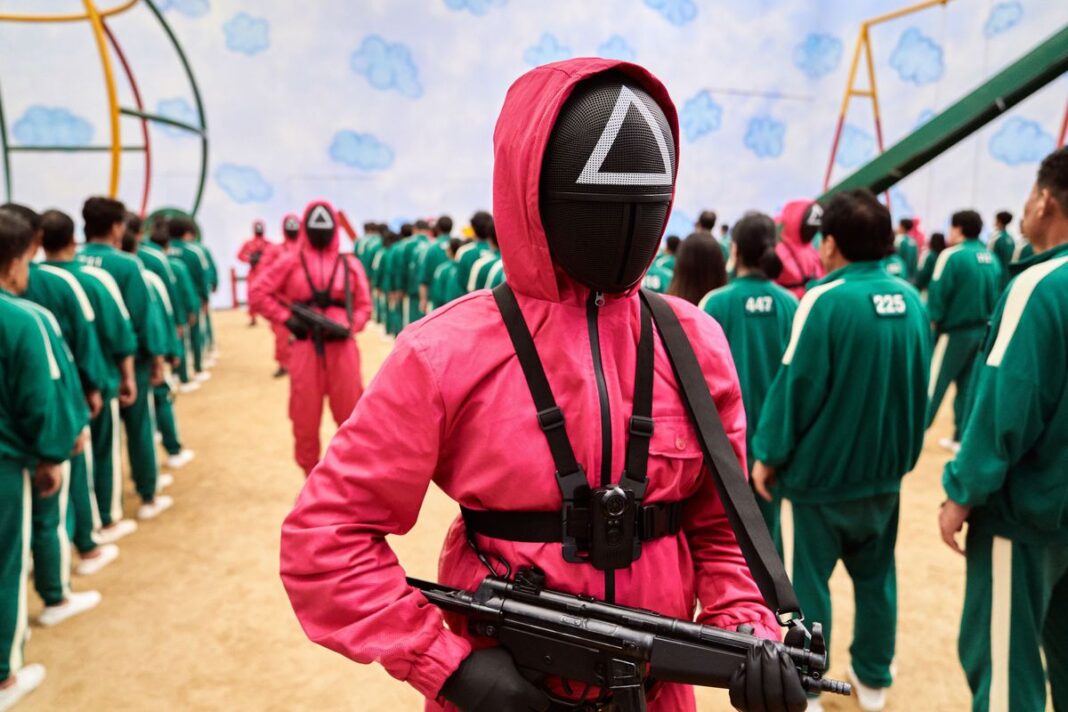 Hwang Dong-hyuk, the creator of Squid Game, became deeply in debt in 2009. When he and his mother were unable to find paid work, he had little choice but to rely on loans to get by. Hwang’s nation is a dismal civilization, divided between those who work themselves to death and those who are imprisoned in debt after being laid off.

He created something that transcends national lines by channelling the experience of underprivileged South Koreans into one of the best TV shows of 2021.

We witnessed 456 debt-ridden participants chosen by an enigmatic business to participate in a real-life game show in which the winner takes home 4.6 billion pounds (£28 million) if they survive a series of horrific challenges, while the losers end up in corpse bags. Contestants could only move when the face of a frightening mechanised doll was turned away from them in the first episode. Those who were caught off guard were mowed down by machine gun fire. This was a drama that pushed us to follow the idea of capitalism to its logical limit by considering everything, including other humans, as commodities, as means to ends, while dead littered the floor and the living congratulated themselves on surviving.

In a society where most of us are on the verge of or in debt, Squid Game wondered how cruel we would be if we had the option to get out. Would you rather be a social Darwinist winner or one of the 455 corpses whose organs are harvested for black market sale? Would you rather be the relatable and compassionate loser dad, Seong Gi-hun (player 456), or the self-serving venal mobster Kang Sae-byeok (player 067)?

Its attraction, though, was based on something less lofty. One of the reasons Squid Round surpassed Bridgerton as Netflix’s most-watched series is that it was a suspenseful thriller in which we never knew who would be killed off in the following game. That ability to generate tension, where anything may happen and no character is safe, is a storytelling quality rarely seen on television nowadays. One of the thrills for me was being caught off guard multiple times when I thought one of the characters would live but was killed off. It’s just as well I didn’t bet on the outcome; I’d be a lousy gambler like Gi-hun when he gets fleeced at the bookies.

‘It’s not meaningful,’ says one of the contestants in the Squid Game.
‘I’m not that wealthy,’ says the designer of Squid Game. It’s not like Netflix gave me a raise or anything.’

Squid Game wasn’t the first show to assemble a group of individuals and have them kill each other in order to survive for the amusement of others. Hwang examined fight-to-the-death precedents such as the early 2000s Japanese film Battle Royale and the 2007 TV anime Gyakky Burai Kaiji: Ultimate Survivor before creating Squid Game, then upped the voyeuristic ante to make his version even more grippingly nasty. When a group of disguised VIPs (most of whom are, notably, westerners) shows up midway through the series, they wager on who will live and who will die. They ate feasts behind glass screens with great views of the carnage below and used humans as footstools.

One of Squid Game’s mysteries for me was that the drama did not play out as a TV show, as Suzanne Collins’ Hunger Games did (there is no oleaginous Stanley Tucci interviewing survivors about their love lives before they battle to the death). But that would be missing the point of Squid Game: it was a critique of a society gone wrong, not of media rapaciousness. Hwang, who is currently working on the second season of the show, may not have wanted to bite the Netflix hand that fed him.

There have been accusations that the subtitles do not provide a complete picture of what is being conveyed in Korean. Or that the westerners’ accents were terrible, and sure, some people, including NBA star LeBron James, thought the finale was unsatisfactory. Hwang, on the other hand, accomplished what he set out to do.

“The show is driven by a simple concept,” he explained. “We’re battling for our lives in really unfavourable conditions.” Poorer countries are unable to get their citizens vaccinated during the epidemic, so they get viruses on the streets and may die. It’s not really profound.” But, Hwang, it is. Squid Game was a world allegory set in 2021.

Apple will have beta 6 of its upcoming iOS 14.5 update to developers for testing purposes. The update is almost ready for a global...
Read more
News

A double police error was the trigger, last Tuesday, for the eviction of 197 immigrants from the port of Arguineguín (Gran Canaria) when they...
Read more
Entertainment